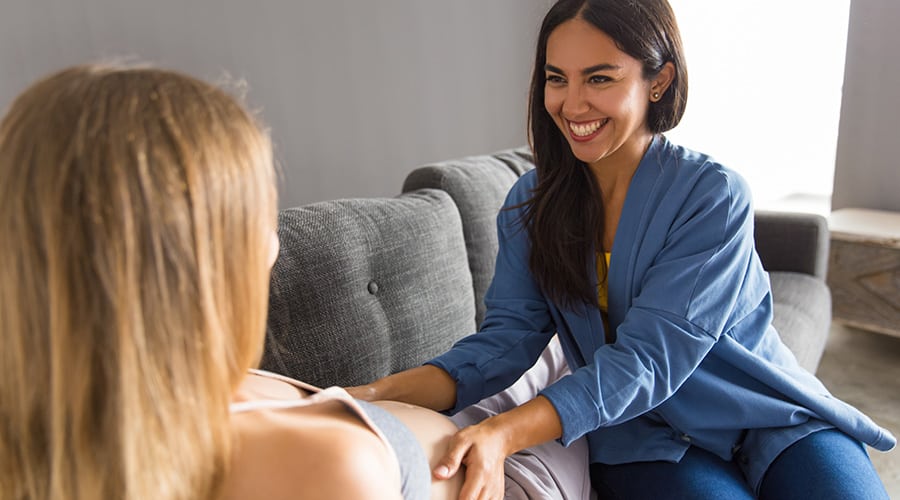 After graduating from nursing school in 1991, Julie Paul spent 13 years working in labor and delivery before deciding to return to school for her Family Nurse Practitioner (FNP) certification.

“I got about three-quarters of the way (through the program),” she recalled, “before realizing it wasn’t what I wanted to be doing.”

Her next attempt at finding her passion took her into midwifery, where she entered the Frontier Nursing University curriculum that would mark a turning point in her career. Able to transfer some of the credits from the FNP program, Paul graduated in early 2006 from what was, at the time, known as Frontier School of Midwifery and Family Nursing.

She was fifteen years past graduating nursing school – a point that some would consider at or approaching mid-career. But for Julie Paul, DNP, CNM, PMHNP-BC, PMH-C, FACNM, it was just the beginning of a brand-new journey that has featured Frontier Nursing University at every turn.

But it all started back in 1939 as the Frontier Nursing Service, when the Frontier Graduate School of Midwifery was established, making Frontier today the oldest continually operating nurse-midwifery education program in the country. In 1970, the name was changed to the Frontier School of Midwifery and Family Nursing when they opened the nation’s first family nurse practitioner program. The school would later become the first to offer distance learning in nurse-midwifery, and in 2011 further evolved to become Frontier Nursing University (FNU) to emphasize its now-numerous graduate-level programs. That same year, FNU was ranked No. 1 in the nation among graduate schools for nurse-midwifery.

FNU offers a graduate Nurse-Midwife specialty program that applicants can pursue on a part-time or full-time basis while completing a Master of Science in Nursing program. Upon completion of the Master’s program or post-graduate certificate, students have the option to continue to the accompanying Doctor of Nursing Practice program via direct admission.

The distance education model allows students to pursue their degree(s) from their own communities, completing courses online while working with practicing nurse-midwives during clinical experiences.

It was this model that allowed Julie Paul to complete the program in 2006, all while raising a family at home in New Hampshire. But after a move to Massachusetts, four years later Paul decided she wasn’t finished. “I wanted to create a hospital position that would enable me to support my family,” she said. “So I decided to complete my DNP.”

It was an important decision made easier by the accessibility of Frontier’s online programs, which had Paul up and running quickly, allowing her to get her DNP within 15 months. “I worked in a triage department for four weeks, and I compared that to the regular care of OBGYNs and midwives,” she

recalled, explaining her doctoral research. “I found an increase in patient satisfaction, a decreased length of stay – both statistically significant.”

Once her paper was published, her doctorate was complete – but Julie’s experience at Frontier was just beginning. “In July 2011, I went to work at Frontier as an instructor,” she said. “I started off working in their physical assessment course, and within nine months I was promoted to become the course coordinator for their advanced antepartum course.”

It’s possible now for Julie to view her career in two distinct time periods – pre-Frontier, and everything that came after her first foray into the Nurse-Midwifery program in 2004 that started her on her current track. “To that point, I’d been at home with my kids, working part-time… I just needed more,” she explained.

So she headed into a five-day “Frontier Bound” program meant to welcome new distance learning students in person. “It was a very intimate setting,” Julie said. “Everyone was so welcoming. They made me feel like the most important person in the world. It may sound strange, with a distance education school, but I felt like I made more connections with people at Frontier that I did within my local community.”

Initially, Julie benefitted from the ability to proceed through the program at her own pace. “There weren’t any structured terms,” she recalled. “You went in, did your coursework, and you could graduate when it was complete. At the time, you had to mail things. I would take my proctored tests at the local library. It was a lot more cumbersome that way, but everything went much quicker too.”

When it came time to complete clinicals, Julie was assigned a regional coordinator as a mentor who helped her through the process.

By the time she returned for her doctorate, things had evolved, and Julie was able to submit papers and take exams online.

Just as Julie was about to complete her doctorate, tragedy struck repeatedly, as her nine-year-old nephew passed away within weeks of a patient dying in childbirth. “These things are obviously very traumatic,” she explained. “So when they came to me with this opportunity, a change sounded pretty good at the time.”

Even now, when she’s returned to full-time hospital work, Julie says she wouldn’t trade her teaching experience with Frontier for anything. “Working with the people at Frontier was amazing, and the instructors at Frontier are so welcoming,” she said. “They come from different regions, they come with different experiences. Professionally, their support and mentoring allowed me to move up quickly.”

The only reason she left Frontier was being offered the full-time position she’d so long desired as co-director of the Midwifery program at South Shore Hospital – where she still works today.

But Julie was by no means finished – when she immersed herself full-time at South Shore, she realized she had few resources for her patients who underwent postpartum screenings. She decided she’d return to school for her Psychiatric-Mental health NP. It won’t take you long to guess where she turned.

“That was my third trip back to Frontier,” she said. “Within six months of graduating, I was able to open up a hospital-based clinic – a brand-new service at the hospital.”

Even today, Julie maintains strong relationships with a number of the faculty members at Frontier Nursing University.

“My very first day on campus, (Frontier president) Susan Stone told me ‘Julie, you remind me of myself,’” Julie remembered, “and that made me feel like I could do it. To this day, she’s invested in my career. She’s nominated me for national committees, and I’ve reached out to her for references. She was my mentor when I went for my fellowship with the American College of Nurse-Midwives.”

“There were a lot of options for programs when I went for my doctorate or my Psychiatric-Mental Health NP,” Julie summarized, “but I feel like Frontier offers a really strong educational experience and amazing support. Despite the distance, you feel like you’re part of something bigger.” To learn more about the Nurse-Midwifery program at Frontier, visit https://frontier.edu/nurse-midwife/

Rob Senior has more than 15 years of experience covering, writing and editing industry news and content specific to the healthcare community and more than 10 years working for ADVANCE Healthcare Network. Rob Senior can be reached directly at rsenior@advanceweb.com.

Stay up-to-date and grow your skills

Get fresh tips and insights emailed to you

Emails full of tips, news, resources and advice will be sent your way soon.